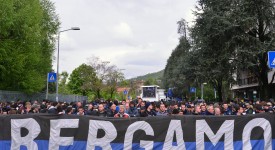 Atalanta supporters pay hommage to Italian footballer Piermario Morosini as the hearse carrying his coffin leaves after the funeral service at a church on April 19, 2012 in Bergamo. The 25-year-old, who played for second division team Livorno and was on loan from Udinese, died during a match at Pescara on April 14. AFP PHOTO / GIUSEPPE CACACE (Photo credit should read GIUSEPPE CACACE/AFP/Getty Images)