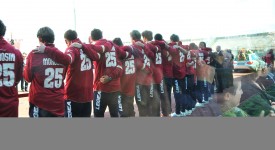 LIVORNO, ITALY – APRIL 17:Â  The coffin of footballer Piermario Morosini is displayed for Livorno football players to pay their respects at Armando Picchi Stadium on April 17, 2012 in Livorno, Italy. Italian footballer Piermario Morosini of Livorno died (aged 25) after collapsing whilst playing in the Italian Serie B match between Pescara Calcio and AS Livorno in Pescara on April 14, 2012.Â  (Photo by Laura Lezza/Getty Images)